Sometimes I think about how people can have long conversations for hours and still not cover everything they want to talk about. And then that makes me think about how people can't watch ALL the movies or read ALL the books. And that sucks. Because everything deserves watching (except probably From Justin to Kelly, which, if you haven't seen, don't watch it. Just listen to Kelly's CD instead. Way better use of time.) But I want to read all the books. Well, probably not all of them, because I get bored easily. But there are a lot of books I want to read and movies I want to see but I can't because there isn't enough time for that to happen! Even if I quit my job and just devoted all my time to watching movies and reading books I wouldn't finish. Because there are always more. And there are lots of conversations I want to have. Also I would run out of money because I'd only be watching movies and reading books. And as far as I know that isn't a job I can have without doing some sort of analysis on what I'm watching/reading.

Has anyone figured out how to simultaneously have a conversation, read a book, and watch a movie? I doubt it, and if you did, you're still missing so much! NOT ENOUGH TIME!

Just a thought for today.
Posted by your invisible pixie at 10:25 AM No comments:

Hannukah with the family!

Posted by your invisible pixie at 9:28 AM No comments:

Just another day at the office... 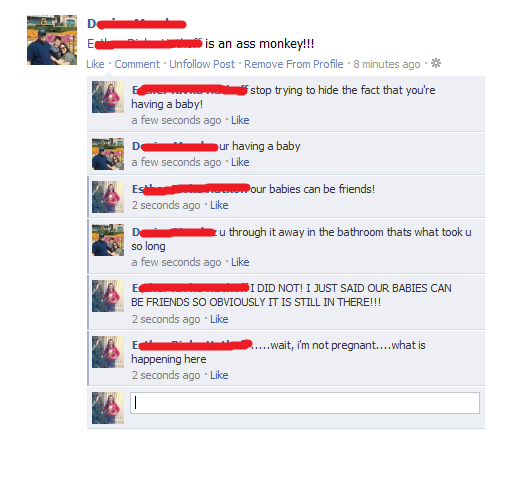 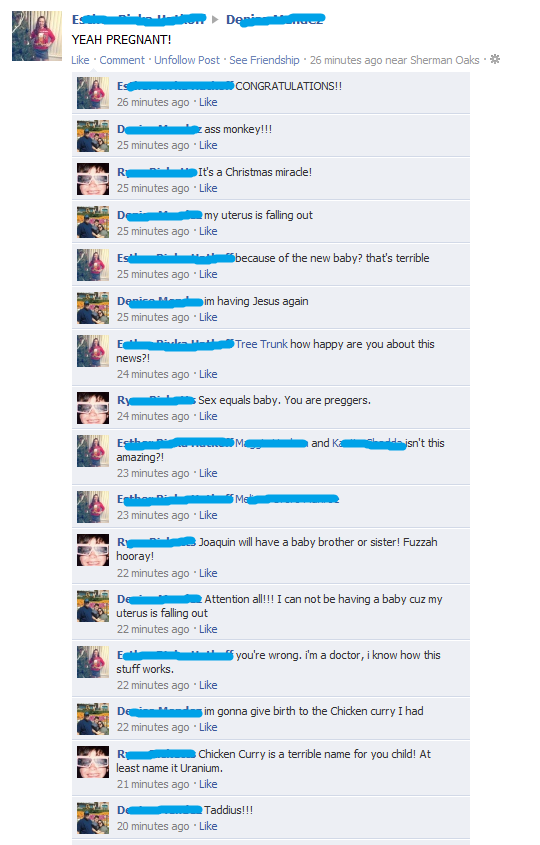 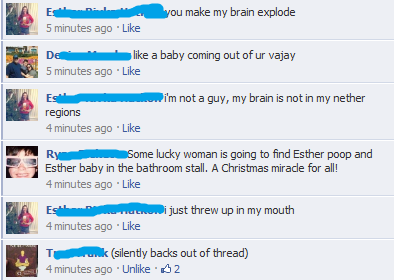 Posted by your invisible pixie at 4:15 PM No comments:

So I guess I'll get things started with the most recent shenanigans!
A little backstory first, though. Last week, my upstairs neighbors had their television turned up ridiculously loud. So loud, in fact, that I could almost figure out what they were watching, had I wanted to. Around 11:30 (on a school night!) I decided that I had enough, and needed to get my beauty rest.
Now, I'm not one for confrontation. I really try to avoid it at all costs, but I was tired and annoyed after hearing this blasting television for three nights in a row until the sun was almost up. So I made my way up the stairs to knock on their door. Well, remember how I said I don't like confrontation? (If not, I wrote it like one sentence ago, so you should start taking some gingko baloba.) I knocked meekly. Literally, if you had been standing on the other side of the door you wouldn't have heard it. I waited a minute, then knocked again, a tiny bit louder. Still no answer. Now, keep in mind that it's 11:30 PM on a Tuesday night. There are a bunch of families in my building, so I was trying to be mindful of them. I knocked on the door with what I thought was force.
A guy in the apartment next to the one I'm knocking on comes out of his apartment. He asks me what's going on, and I tell him my problem, and turn to knock again. It ends up being a quieter knock, so the guy is like "Well, if you want to get their attention you should maybe actually knock." So I bang on the door. Still no answer. The guy is just kind of watching what I'm doing, and seems to be inwardly laughing at the fact that nothing is happening. Finally, I ring the doorbell. The lady of the house comes to the door, but doesn't open it. She talks to me through the door.
Her: Hello? Who is it?
Me: (quietly) Hi, it's your downstairs neighbor.
Her: Hello? Is someone there?
Me: (slightly louder) It's your downstairs neighbor...
Her: Hello?
The guy: (yelling) It's your downstairs neighbor!
Her: Hi, what can I do for you?
Me: (quietly) Your TV is really loud, can you please turn it down?
Her: Hello?
Me: YOUR TV IS REALLY LOUD, CAN YOU PLEASE TURN IT DOWN?!
Her: Oh sure!
She switches her light off, and the guy is laughing at me.
We make introductions, I thank him for helping me, and I head back downstairs.
On Monday, I made cookies with the ingredients my coworkers gave me for my birthday. I ended up making a bunch extra, so I decided to thank my neighbor for helping me out. You know, to try being friendly or something. He ended up not being home on Monday, so I brought them to him on Tuesday. I was going to try and use bringing the cookies as an excuse to start talking to him, but I get nervous sometimes! So it didn't work. Our exchange went something like this:
Me: (holding the plate of cookies) Hey, I just wanted to thank you for helping me out the other night.
Him: No problem!
Me: I made some cookies and I had some extras, so I thought I'd bring them to you. Um...anyway, thanks!
Him: You're welcome! Have a nice night.
Me: You too!
And then I ran back downstairs as fast as my legs could take me. I am such a wuss.
So that brings us to the actual shenanigans of the evening. I was with my friend A, and decided it was a good idea to attempt talking to him again. A agreed (because she is a terrible influence!), so we went upstairs. We were standing outside his door, and I had no idea what I was going to say to him. These were a few of my options:
- How old are you?
- What did you think of the cookies? Would you like to write a review for my website?
- I'm having a party tomorrow, it's probably going to be super awkward but if you want to stop by, you should!
I was literally standing outside his door, about to knock. I felt like Nemo, when he swims out to the boat and his dad is like, "don't you dare touch it!" (And then he touches it and his friend is like "He touched the butt.") I kind of had a fear that he was going to open the door and see me with my arm halfway stretched to his door and just be like "uhhhh what is happening here...?"
I still had no idea what I was going to say (probably option three, minus the awkward part) but I knocked! And then......HE DIDN'T ANSWER! A asked if I wanted to knock again, and I hesitated but said no. BUT THEN! I ran across the courtyard up the other stairs to see if he was in his living room! AND HE WASN'T! But had he been, he probably would have opted to move. Because he has a crazy person living downstairs.
You guys, I'm nuts. I'm sorry if you're friends with me.
Posted by your invisible pixie at 12:14 AM 1 comment:

Email ThisBlogThis!Share to TwitterShare to FacebookShare to Pinterest
Labels: neighbors

So. I do some (self proclaimed) pretty ridiculous things.
I guess I'm going to try to document them.
Word.

Posted by your invisible pixie at 11:37 PM No comments:

your invisible pixie
I am...short, crazy, funny, sometimes really dumb (but hey, aren't we all?)... I like to sing. Uh....And dance. I'm not a great dancer, but I think its fun anyway. Yep. And also, I really like being Jewish. The end.

Want to email me?
your.invisible.pixie@gmail.com
Ask me anything, I'm up for it.