I wonder how many times I've accidentally flashed the child who lives across the alley from me. His window looks directly into mine, and although I keep my shades closed at all times (because let's face it, there are creepers out there), my roommate's cat jumps into the window and messes the shades up. So...it's possible. Whoops.

Kid across the alley from me: I'm sorry...or you're welcome!

UPDATE:  The kid is about eight years old. And super into butterflies.

After discussing this scenario with a friend of mine, this is what was imagined his blog would say:

I SAW A BOOB TODAY, BUT IT WAS ONLY THE SECOND COOLEST THING THAT HAPPENED BECAUSE IT'S MONARCH SEASON!!!!

Posted by your invisible pixie at 12:31 PM No comments:

What are the chances that I would find both of these things today? Crazy! Love it. True life...

If someone filled this out and gave it to me I would probably die of happiness slash embarrassment slash feeling feelings which would be SUPER WEIRD because I DON'T FEEL THINGS. What? 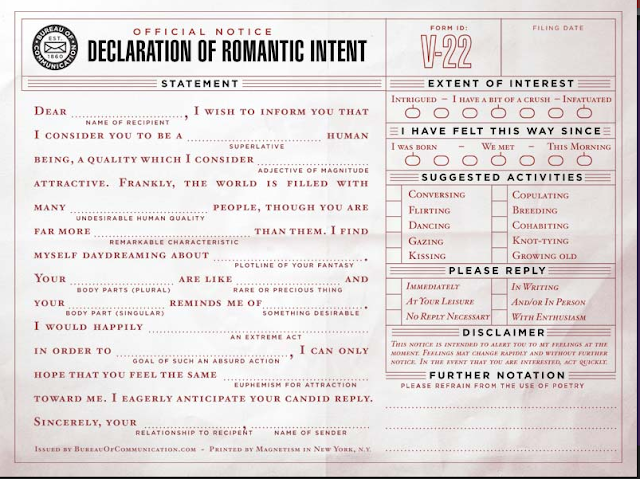 Also, happy birthday to Hilary Duff yesterday who apparently just turned 25 and is married with a child and although she was a child star has not gotten into any trouble with the law. Amazing! Take that Amanda Bynes and Lindsay Lohan!

When I was younger people thought I was Lindsay (during the Parent Trap era). A few people were like OMG ARE YOU LINDSAY LOHAN?! And because I thought they were kidding I was all "yes, yes I am." And then they were like YOU WERE IN A MOVIE. And I was all "yes, yes I was." And then they would walk away. One time a girl asked me for my autograph and I was like "Oh I'm sorry I can't."

Which reminds me of New Years last year when this guy was trying to midnight mouth rape my friend Amanda and me while we were in Vegas (yeah ok, I get it, you want someone to kiss at midnight to start the new year off right but seriously, ew) and at first I was nice and said we couldn't because we had boyfriends, but he was PERSISTENT. So then I was like "Look I'm sorry we can't kiss you but we have AIDS." And then we walked away from him but he kept following us. Obviously the dude wanted AIDS.

Happy Carmageddon II!
Posted by your invisible pixie at 8:24 PM No comments:

In the old noggin...

In trying to figure out what to post about this evening, I realized I was trying to force something just for the sake of....whatever. I lost my train of thought. Awesome, I love when that happens. So here's a list of things that are on my mind at the moment:

1) I watch wayyyyy too much TV. So much so that I made an excel spreadsheet so I could keep track of the shows I watch. Yes! Dedication! Also, if the list of shows you watch is over the number of fingers on your hand(s), you know you watch too much! I am going to refrain from telling you my number because it's RIDICULOUS. And let me tell you, I am suuuuuper behind. I feel like trying to catch up would take months. It probably will. Because it's almost like a second job. Or a sickness. Yeah, definitely a sickness. I should probably get help, but I don't have time because of all the shows I watch. Yeah...

2) Everybody is KILLING IT on Facebook these days. People getting engaged, or married, or having babies, or starting businesses, or getting jobs that they've been dreaming about since they were still in the womb. That's awesome. GOOD FOR YOU. I'm thrilled that your lives are taking off while I still cuddle with my stuffed animal Pigglywinks every night and have very little direction otherwise. But whatever, Pigglywinks will be with me forever! Commitment! It's a thing! Whatever, sometimes I like to cuddle. And I've got a cool job right now, too! So THERE. Suck it. Wait...Anyway, good job people of the world. High fives for everyone.

3) I joined a gym! Hurray fitness! I am TOTALLY going to be bikini ready by 2013. Seriously, that's what I told them my goal was and they were all "Oh yeah, that's definitely doable!" And in my head I was thinking "uh, if it's not doable that's really freaking pathetic since this summer is barely over!" Anyway. Getting in shape! Being healthy! Great!

4) INTERNET DATING IS STILL DUMB. That's all I have to say on that right now. (But seriously, it's dumb. For realz.)


Ok well I guessssssss that's all that's on my mind right about now. So if you'll excuse me I am going to go eat a big bowl of ice cream while I think about my personal training session I'm having tomorrow, and then I'm going to cuddle with Pigglywinks. (Minus the bowl of ice cream. BIKINI 2013 HERE I COME!)
Posted by your invisible pixie at 10:46 PM No comments:

I want to weird you out.

I want to change my clothes from my normal patterns. No jeans, no t-shirt, no sweater. I want to start wearing dresses just to see what you'd say. Do my hair in ribbons and curls. Paint my face with the colors of the wardrobe I'll put away.

I want to tease you with my brain, just like you tease me with yours. I want to watch your face change with the words I've chosen to tantalize your thoughts. I want you to think about me. Think of no one else for awhile.

I want to listen to your past, and have you listen to mine. I want to know how you came to be like this. How you think, how you feel. Where your brain goes when you're not paying attention. What you listen to when you're having a bad day. What makes you breathless.

I want to spend time with you, away from here, from the prying eyes of the public who don't know what things are unless they're spelled out. Go somewhere and have a beer with you, let our words and thoughts play together. Maybe our fingers.

I want you to want these things too.
Posted by your invisible pixie at 10:53 PM No comments:

Can I borrow some sugar?

I am very vocal with some of my friends about wanting to do things that are a little more than friendly with people. Here are some commonly used phrases that I will say to my friends but would never say to the person I'm interested in (unless we've been dating for awhile):

There are a few more but those are more towards specific people and NOT APPROPRIATE FOR THE RANDOM PEOPLE OF THE INTERNETS TO KNOW AT THIS PRESENT MOMENT.

Thank you for your time.

PS I'm in big trouble these days...definitely channeling Sandra Bullock in Two Weeks Notice or Ryan Reynolds in The Proposal. Ten points to you if you guess the connection! (Aside from the part where I'm super sexy. That's way too obvious!)

Posted by your invisible pixie at 2:45 PM No comments:

I just wanted to let the world know that during last night's midnight earthquake, my response was to take off my pants. This was a reasonable reaction in my half asleep state.

Clearly I am the kind of person you would want around in an emergency. Clearly.
Posted by your invisible pixie at 12:01 AM 1 comment:

Last night I tried to make a smoothie and failed. Apparently I don't know how to use a blender. Exciting night!
Then today, I asked a friend of mine if I should sign up for speed dating. She read "special ed" and thought it was a normal question for me to be asking.
Happy Labor Day!
Posted by your invisible pixie at 10:53 AM No comments:

your invisible pixie
I am...short, crazy, funny, sometimes really dumb (but hey, aren't we all?)... I like to sing. Uh....And dance. I'm not a great dancer, but I think its fun anyway. Yep. And also, I really like being Jewish. The end.

Want to email me?
your.invisible.pixie@gmail.com
Ask me anything, I'm up for it.